I'd like to introduce to you my nephew, Drew.  He is my brother Mike's oldest son. 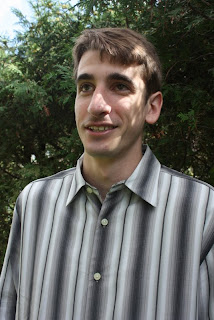 Drew is twenty something - five maybe!!  He lives in Orlando also.  He is a graduate of the University of Florida and is an aeronautical engineer.  We like to refer to him as a rocket scientist.  He loves his Gators!
Drew works for a company that designs and makes missile defense stuff.  He enjoys his work and is moving up the ranks at a pretty good clip.
He recently purchased a home in a nice little 'burb in Orlando.  He is learning all about home ownership and decorating.  He's slowly learning the art of cooking.  He has a desire to master BBQ'ing.  He likes his Weber Grill - just like his Grampa Bruno -  he prefers to cook with charcoal.
Drew is very independent, he likes to think things through, he doesn't make quick decisions at all.  He weighs out all options.  He's very sensible.  Drew likes to travel.  He went to Japan last year and really enjoyed it. He took some really great pictures of parks and gardens.  He was brave and stayed in a Capsule Hotel.   He's doing some undergrad work in photography - he's an understudy of my niece Jessie.  You can find them on twochmuras.wordpress.com.  Drew enjoys music also.  He has a great sense of humor.  He doesn't think he could trust a woman with his credit card, not even me, Aunt Barb!  Imagine that!


Drew's a great guy.  I feel honored when he calls me and asks me for advice - be it cooking, decorating or whatever.