I had a massage this morning! GLORIOUS!

I had a one hour massage. My shoulders are so bad...my sister thinks they feel like granite counter tops. No movement in those muscles.

My massage therapist, Laura was great. She had some"umph"behind her touch. She really released a lot of knots!

I know this will be a regular stop when we return. Laura Rocks! Off to get another glass of water to rid those toxins she knocked loose.

Here in Orlando, it's refreshing to see spring time beauty knowing back home it's a blizzard.

Azalea bush in our front yard

Along side the house

The crepe myrtles are budding!

Taking a side trip to Cocoa Beach....our room with a view.

We went to see the manatees at Blue Springs State Park today. The manatees look like logs in the water.

And this guy was hanging out for a photo op also.

Then we headed to lunch.

Gourmet sandwiches, sangria and a taste of sweet!

We are leaving this 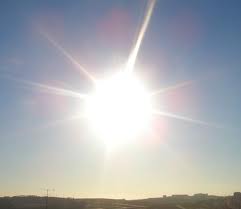 I'll be posting from the warm, sunny south!
Posted by Barb at 12:15 PM 5 comments

I stumbled upon this dessert and obsessed with wanting to make it.I love just saying it...aff-o-gato! 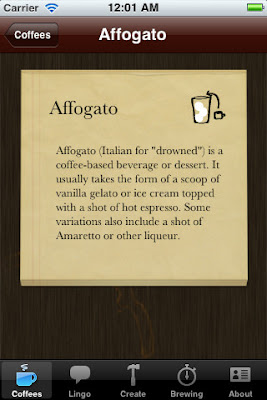 Have you every had it? 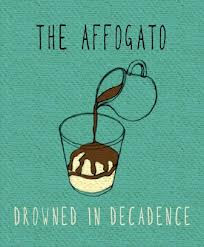 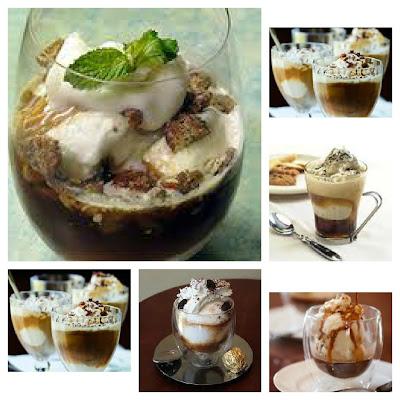 It sounds very easy. The recipe I was perusing stated to take Haagen Das Ice Cream..preferable vanilla.  Scoop into large balls and place on parchment paper and place in freezer.  You want the ball to be very harden.  When ready to serve, start with a nice vessel, place crumbled cookies in bottom of glass (shortbread or crumbled biscotti, then the scoop of ice cream, pour over a shot of espresso*, then top with real whipped cream and shaved chocolate.  Ta-da!!
* if you don't have an espresso machine, simply use instant espresso/hot water.

Now, doesn't that sound decadent and delicious and to die for.  I so want to try this.  I think Lynne and I will do one Tuesday afternoon, but it will have to wait for now.....busy the next few weeks.

If anyone has tried this, please let me know.! Supposedly they make it at Starbucks.
May have to check that out in the interim.
Posted by Barb at 7:24 PM 1 comments 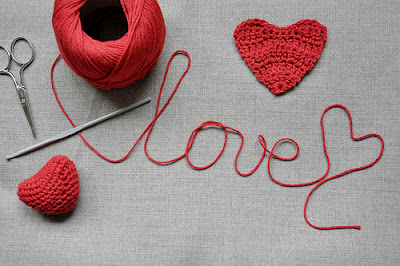 Valentine's is for the Birds! 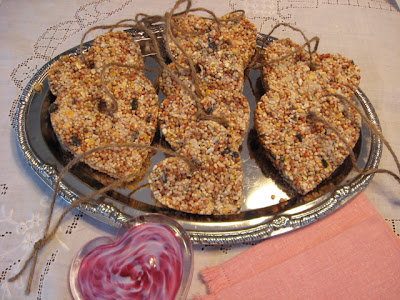 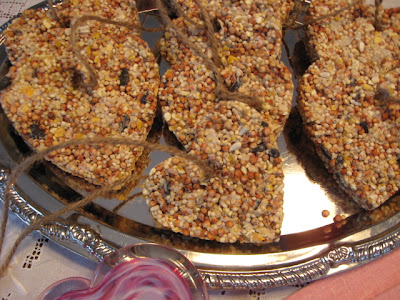 Bird Seed Valentine's for our little feathered friends.  They would enjoy a treat also.  I made these yesterday.  I thought they were cleaver!  Just hang from a branch in a tree!  And, you still have time to whip some up!  They are that easy!

Mix the flour, water, gelatin and corn syrup together in a large bowel.  Add the birdseed and mix well.
Spray inside of a cookie cutter with cooking spray (PAM).  Line a cookie sheet with parchment paper or wax paper.  Soon the mixture into a cookie cutter and press firmly with your fingers.  (Spray your fingers with the nonstick spray so the birdseed doesn't stick to your fingers.) Insert a chopstick or straw into the top of your shape to create a hole to use for hanging.  Carefully remove the cookie cutter and repeat.  ReSpray cutter after 3-4 uses. Leave on cookie sheet. Let them dry overnight.

String jute or yarn or ribbon or string through the hole and hang onto the trees for the birds to enjoy.

Note:  make sure you place your hole a bit down from the top of the shape so the string doesn't break through the birdseed from the weight of the ornament.

Package in a cellophane bag with a pretty ribbon and give to a friend~ !

This is the last of the series of No More Winter Whining over at Life is a Garden and these are my Colors.
This week's theme is What Do You Do for Fun in the Winter.

Everyone's definition of fun is different.  What might be fun to me is boring to someone else.  So, fun is very personal!

Winter is a time that I feel one has an opportunity to slow down, nest, rejuvenate and get to things that you are too busy to do in the summer.  So, fun things for me in the winter may be:


So there you have it.  Winter Fun.
What do you do for fun?

About all that's been happening here the last few days is snow, snow, snow.  Between yesterday and this morning we got at least a foot.
Thus, I've been snuggled in getting a few Valentine things together.
A little knitting......
You can see the knitting is still on the needles...we were just trying it on for size so it is a bit longer.

Off tonight for a Lake Perch Dinner.  My sister-in-law Linda and I are going to the "Bling Thing" first.  Wine and chocolate and vintage costume jewelry extravaganza.  Should be interesting....over 1000 pieces.  Hope to find something great.

Email ThisBlogThis!Share to TwitterShare to FacebookShare to Pinterest
Labels: recipes

I made this for supper tonight - it is very good! 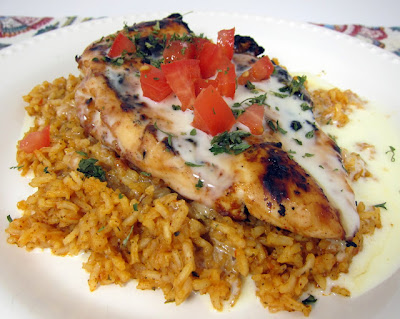 Pour Baja Chipotle Marinade over chicken and let marinate in the refrigerator for 30 minutes or overnight. When ready, grill chicken until done (165 degrees).

While the chicken is grilling prepare the rice.

Heat oil in a large saucepan over medium heat and add rice. Cook, stirring constantly, until puffed and golden. While rice is cooking, sprinkle with salt and Southwestern or Taco Seasoning.

Stir in onion flakes, tomato sauce and chicken broth; bring to a boil. Reduce heat to low, cover and simmer for 20 to 25 minutes. Fluff with a fork.

Heat cheese dip according to package directions set aside.

To assemble the Pollo Loco - place 1/4 of the rice on a plate, top with grilled chicken. Pour 2-3 Tbsp cheese dip over chicken and rice and top with chopped tomatoes.

I have a recipe for a Pepper Jack sauce that would really be nice with this in lieu of the Queso.  I will try and remember to post it tomorrow.  Let me know if you try this recipe.

Are We Getting Old?

I really hate to say that, however, the Super Bowl last night just didn't do it for me.  The half-time show featuring Beyonce'...excuse me but that was not my idea (or anyone else at my house) of entertainment.
I didn't understand one word and the choreography, shall we say, was not anything more but exaggerated sex moves. That's not entertainment to me.  So...off my soapbox I go.

The best parts of the weekend for me were two things:  a learned how to play cribbage and I tried two new recipes. My pictures turned out blurry so bear with me.

The first one was a Chocolate Pecan Pie from Country Living Magazine November 2012. 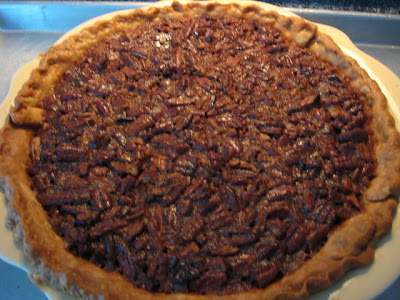 It has the right amount of bittersweet chocolate, lots of pecans, and is very rich and very good.  We warmed it just a few seconds in the micro and then topped with a dallop of whipped cream! Delicious!

Next up, is Cheddar Bacon Pull Apart Bread 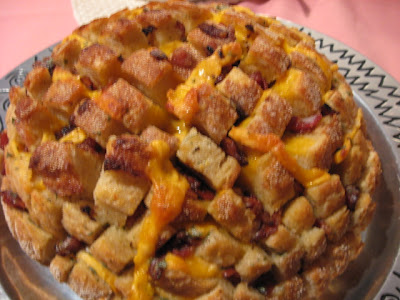 My sister proclaimed I must make this for every family gathering from now on.  That kind of sums it up.
Here's the recipe:
1 unsliced loaf of (round is preferable) sourdough bread,( I used regular bread)
8-12 oz cheddar cheese, thinly sliced
3 oz bag Oscar Mayer Real Bacon bits (I fried up real bacon, drained and crumbled)
1/2 cup butter, melted
1 Tbsp Ranch dressing mix

Using a sharp bread knife cut the bread going both directions. Do not cut through the bottom crust. Place slices of cheese in between cuts. Sprinkle bacon bits on bread, making sure to get in between cuts. Mix together butter and Ranch dressing mix. Pour over bread. Wrap in foil the entire loaf in foil and place on a baking sheet. Bake at 350 degrees for 15 minutes. Unwrap. Bake for an additional 10 minutes, or until cheese is melted.
Recipe from Plain Chicken.com  Check her out, she has some awesome recipes.


In addition to that, we had bbq riblets, bacon wrapped sausages in chili sauce, a great nacho jalepeno cheese dip and potato soup.  We were bursting at the seams. 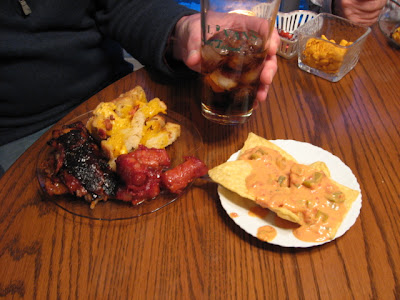 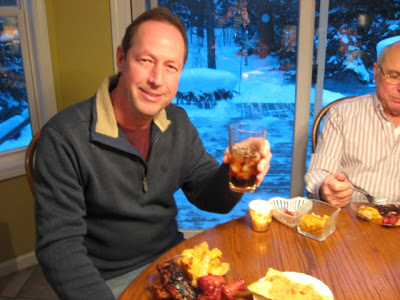 As for the game, who won?  I was busy knitting, on my iPad playing words with friends and playing with the dog.  Oh, I guess it was the Ravens who won, so my husband tells me!

Again this week, I am participating in No More Winter Whining.  This week's subject is finding nature in winter.  I headed out with my camera and hopefully you will enjoy these pictures I snapped.


Nature is all around us.  The wind, the snow, the rain.  We had thunder, rain, and lightening this past week.
Why not get out and enjoy what Mother Nature has to offer.
Linking up to Heather.
Posted by Barb at 2:21 PM 9 comments