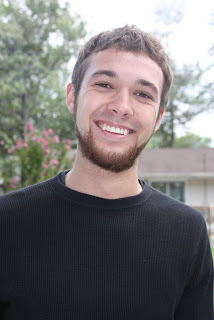 My Tucker.  Maggie's second oldest.  Tucker is 21/22-ish.  He lives in Colorado - Denver to be exact.  He loves it there!  He started college this past semester and is really enjoying it.  He is ready to learn and is determined to do something with his life.

Tucker, too, is an outdoors person.  He loves the snow - can't wait to go snowboarding.  He likes to hike the mountains.  He loves the solitude of nature.  He is great at soccer and has joined several adult teams in the area in which he is residing.  I think because he and his brother Lenny were born in Wyoming - they have the
mountains in their blood.

Tucker is a very likeable person.  He has a great personality and an awesome smile.  He has gone through a lot .....trying to figure out who he is, losing a really close friend to cystic fibrosis rather unexpectedly, and trying to find his place in life.  He tends to be somewhat of a loner - sometimes lost in his solitude.  However, I witnessed this summer that Tucker has grew by leaps and bounds.  He has this new found confidence,  he's happy, and is going after what he wants in life.  He has blossomed.  How that makes me happy.

I think he is in a really good place right now and I have so much faith in the fact that he's going to go great places in life.  He has a new found strength and am really excited for him.  To know Tucker is too love him!
TTFN - Babs
Posted by Barb at 7:45 AM