I am totally using this information from Kate of Another Clean Slate. I have seen The Orphan Train mentioned many times lately. I am suppose to be reading, Tell The Wolves I'm Home. I better get at it. 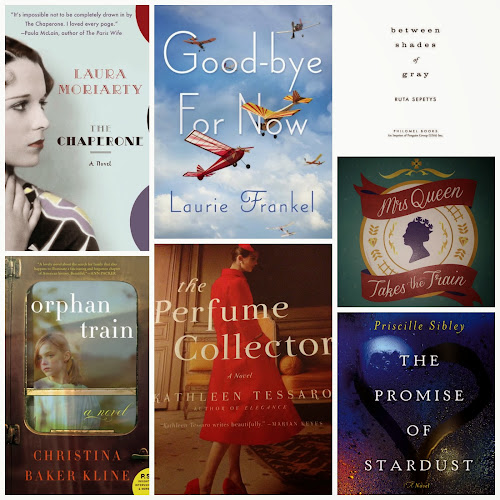 Have you read any of these?

First up was The Chaperone by Laura Moriarty. This was chosen for the month’s Literary Junkies read. It tells the story of the very traditional Cora who accompanied the budding silent-film star Louise Brooks to New York City from Wichita, Kansas. Cora had her own agenda on the trip and she makes some discoveries about her past and opens her eyes to the possibilities of her present. I’d recommend this one for sure.

Good-Bye for Now by Laurie Frankel seemed like it was going to be a cheesy read. After all, it was about a couple who developed a program that allowed them to talk to a simulation of a dead loved one. It was surprisingly touching and would be good for a beach or vacation read.

My favorite book this time around was Between Shades of Gray by Ruta Sepetys. This book took me to Lithuania in 1941 where I met Lina, a 15-year-old girl whose life was turned upside down when her family was forced onto trains and brought ultimately to Siberia by the Soviets. I did not know nearly enough about this part of the war but my eyes were opened wide after reading this book.

Another powerful and eye opening read was Orphan Train by Christina Baker Kline, almost my number one. This is the story of another young girl, this one an orphan, who was taken by train from New York City to the west where children were taken in either as farmhands, house servants and rarely as part of the family.

Taylor from Pink Heels Pink Truck lent me The Perfume Collector by Kathleen Tessaro. I loved this book too. This is the story of an unhappy wife in 1950s London who receives a surprise inheritance from a stranger in Paris. Another recommendation for you all!

I received Mrs Queen Takes the Train by William Kuhn as a table favor at the British American Business Council Christmas luncheon. This was a fun story about Queen Elizabeth leaving the castle and heading to Scotland on her own. It made for an easy fiction read and lightened things up after the heavy stories I’d be engrossed in otherwise.

Another almost favorite of the month was The Promise of Stardust by Priscilla Sibley. This was about a woman who suffers a trauma rendering her brain dead while pregnant. Her family battles each other on whether or not to wait to let her pass away until the baby is born. I would definitely recommend this one too. Be prepared for political debate and tears.

I keep a running log of recommended reads. These will be added. They all sound good. Let me know if you read any and recommend them!

Posted with Blogsy
Posted by Barb at 4:36 PM