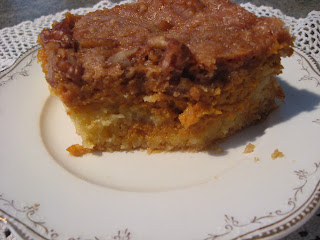 There are no words to describe how good this dessert is.  I can tell you this, I took two very large pieces over to Maggie's for their dessert.  Maggie's man called me about 45 minutes later and asked if I had more of the dessert as he and Maggie were fighting over the last bite.  They came over within minutes and walked home with three more big pieces!

Remove one cup of dry cake mix from box and set aside.
Mix remaining cake mix with one egg and 1/2 cup melted oleo.  Pat into bottom of 9x13 pan.
Mix pumpkin pie mix with the brown sugar, two eggs, and half and half.  Pour over bottom layer in pan.
Make crumble for top:
one cup cake mix, cinnamon, sugar and softened oleo.  Mix until crumbly. Sprinkle over top.  Top with toasted pecans if so desired (better with pecans).
Bake at 350 for 55-60 minutes.  Let cool.  Serve with cool whip.  Ahhhh....heaven.

Another overcast day.
Have a great weekend.
TTFN - Babs
Posted by Barb at 9:40 AM