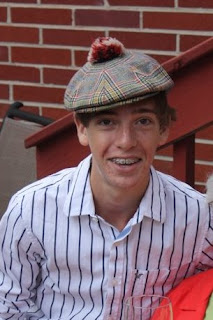 Erik is my brother Mike's youngest son.  He is the brother to Drew and Adam which you read about previously.

Where do I begin with Erik.  I have so much fun with him!  He is in his junior year at Dr. Philips High School in Orlando.  He is a member of the marching band and LOVES his drums.  He plays with so much enthusiasm and excels at it.  In fact, last year he was a participant in the Macy's Thanksgiving Day Parade and was in the drum line of the All American marching band.  Erik travels quite a bit for drum competitions and is quite often sending off CD's of various auditions.

Erik is a young  man after my own heart.  From a very early age, he developed a taste for fine food and desserts.  He is the only child I know that would order a slice of pepperoni pizza and have tiramisu for dessert.  If asked where he would like to go to celebrate good grades on his report card, he would reply "Ruth Chris".  (I haven't even eaten at Ruth Chris but that's one of his favorite's in Orlando).  He also has given  five-star ratings to dessert menus all around Orlando.  He can tell you who has the best creme brulee', the best tiramisu or cheesecake.  A very superb palate for a high schooler!

He encourages me to move in with him.   When I come to visit, he loves my cooking and baking and doesn't want me to leave.  He replies to all  my desserts, "Aunt Barbie, it's a amazing!"  How can you not love that!

Erik and I love to kid each other, he adores his dog Toby, has lots of friends and is considerate of others.
He's getting so tall.  Each time I visit, we  measure our heights and mark them on the kitchen/hallway door casing in red.  He has really surpassed me.  Can't wait to see you again and make the "mark" this winter Erik!