Christmas Crafting I Didn"t Blog About.

I think I may have mentioned previously that I began taking a class at a sewing center in Grand Rapids.  The class meets once a month , Stitching and Embellishments.   I really enjoy this class and the participants as well as the instructors.  Each month we take on a few new stitches.  I was the newbie for a few months but now.....I'm moving up the ranks!  Several have joined in after me!

I wanted to make my nieces a "funky" kind of pin for Christmas.  The first one I made, I solicited feedback from my classmates and the consensus was it was real pretty but something a grandma would wear.  NOT!
I want funk!  Two or three classmates sat with me and we chatted.  One of them real encouraged me to not think too hard about what I'm doing and just go for it.  Just start and don't be to perfect and forget symmetry.   Start a stitch and don't be afraid to stop half way around.  OK....I thought I'll go for it. 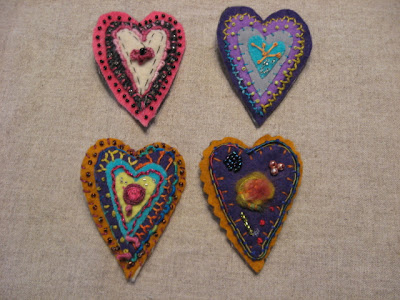 These are the finished products.  Personally, I think they look pretty darn good.  My nieces really liked them.  I am currently wearing the one on the upper right.  I've received many compliments on it, actually.

Setting out to make one for my sister.  She would like purple, turquoise, orange funk.  So I'll see what I can come up with.  Stay tuned....I'll show you the end result.
Posted by Barb at 3:31 PM